Last August, I sat in a small black inflatable boat prepping equipment on a gently-rolling Arctic sea just below 80 degrees North. “How long will the descent be?”, asked one of my colleagues. “About an hour and a half”, I replied; “It’s a shallow dive, only about five and a half thousand meters…” We stopped ourselves and laughed – when did 5,500 meters become a ‘shallow dive?’

An Extraordinary and Ambitious Plan

This dive was in the Arctic Ocean’s Molloy Deep, a trench off the west coast of Svalbard, and the final mission of the Five Deeps Expedition; an extraordinary and ambitious world-first plan to take a manned submersible to the deepest points of all five oceans. This was the brainchild of explorer Victor Vescovo, who was drawn to the adventure, the technical challenge and scientific pursuit necessary to go where no human had been before. To achieve this, Vescovo commissioned a Full Ocean Depth (FOD) submersible from Triton Submarines, bought a former US Navy submarine-hunting ship as a support vessel, and employed EYOS to design, manage and lead an intense series of unique expeditions.

Planning such an expedition is not straightforward, especially when something like this has never been done before. You make plans, and then have to develop contingency plans because that is what you’ll use! The itinerary went through almost 90 versions; permissions had to be sought from 56 different government entities. 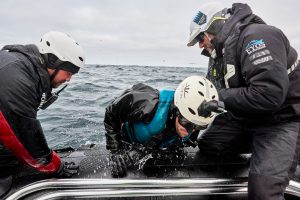 In addition, the FOD deep-submergence vehicle Limiting Factor was still essentially a working prototype when it completed its first mission –  the Puerto Rico Trench in the Atlantic, itself a staggering 8,376 meters deep – and technological challenges continued as new ground was broken alongside depth records. An intensive science program was incorporated and given that the majority of sites had never been seen by human eyes, new data had to be crunched, new species had to be described. A multibeam sonar – the most advanced on any civilian ship – was installed on the renamed DSSV Pressure Drop, allowing highly-accurate mapping of the seabed topography.

To date, the ship has mapped over 1 million square kilometers of seafloor, much of it for the first time. Seamounts, canyons and major geological features were discovered and astonished researchers. This was true exploration in every sense. Onboard, a media team had their own demands, wishing to record every moment and instill their own take on the adventure or drama of the situation. The glue binding all of this together was EYOS.

Leading diving equipment manufacturer Fourth Element also came along with me for the journey – ‘equipment for adventure’ doesn’t need to be just for diving. As a global expedition, we encountered every temperature zone and a variety of weathers. The Hydro-T rash vest and various shorts made me comfortable driving boats over the Mariana Trench in the Western Pacific; the Xerotherm beanie kept off polar winds while Kevlar gloves allowed me to handle towlines in zero-degree water. It was the right kit for this extraordinary job.

In their most recent collaboration with EYOS, Fourth Element released the Unexplored T-shirt inspired by the Five Deeps Expedition as a part of their winter line. 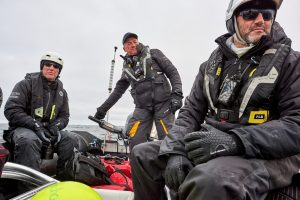 Cruising in a Zodiac During the Five Deeps Expedition. Photo: Reeve Jolliffe

While the Arctic dives signified the historic completion of the expedition, everyone’s attention has always been drawn to the big one – Challenger Deep in the Mariana Trench. In the preceding 60 years it had only been visited by manned submersibles twice, by 3 people; the first, pioneering dive by Lt. Don Walsh of the US Navy and Swiss engineer Jacques Piccard in 1960 aboard the bathyscape Trieste, and James Cameron in 2012 with his craft Deepsea Challenger. In April and May of 2019, the Five Deeps Expedition and DSV Limiting Factor dived into the trench confirming the deepest point and a new record at 10,925 meters. The subsequent dives resulted in a total of 4 people reaching below 10,900 meters. Earlier this year, we returned to Challenger Deep with Limiting Factor and a further 6 dives, including the first by a woman – former astronaut Kathryn Sullivan.

‘What took you all so long?’

We were honored to have Don Walsh join us onboard for those extraordinary record-setting dives in Challenger last year, where he had first explored 6 decades ago. I asked him how he felt, and he replied that at the time he and Jacques expected the deep ocean to open up and be regularly visited. Don mused, “I’m just glad to be here to see this happen”, and then with a wry smile, “I’m just wondering what took you all so long?”