Ben Lyons, EYOS Expeditions’ CEO, said, “Last year we pioneered departures on a private yacht where you could buy a single cabin rather than charter the entire vessel. I was onboard for both departures and saw first-hand the camaraderie and spirit that was forged on expedition. Guests spent evenings cruising through the pack ice with the sun perched on the horizon and afternoons having remarkable encounters with humpback whales from the yacht’s Zodiacs. We look forward to offering more of these extraordinary moments on Legendthis season.”

EYOS Expeditions pioneered fly in/fly out superyacht expeditions to Antarctica ten years ago, and guests on this expedition will enjoy the same convenience of flying over the notorious Drake Passage and maximizing their time exploring the 7thcontinent. With seven full days on the Peninsula, those onboard will have ample time to immerse themselves in the Antarctic while still limiting time away from home. 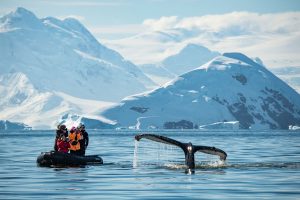 With such a small group of fellow travellers, guests will be able to experience Antarctica on their own schedule. Hop into a kayak, on a whim, to paddle amidst sculpted icebergs; linger ashore while visiting colonies of parading penguins; or enjoy a late morning breakfast and massage before electing to head ashore. Having Antarctica’s pristine environment shared with so few is a genuine privilege, and Legend’s crew (with a greater than 1 crew to 1 guest ratio) ensures attentive, personalised service.

Lyons said, “Smaller groups allow for more intimate interactions with the natural and pristine environment; it is what expedition travel was originally meant to be. With three EYOS Expeditions guides (naturalists) onboard there will be ample opportunity for a deeper level of interpretation and discovery.” 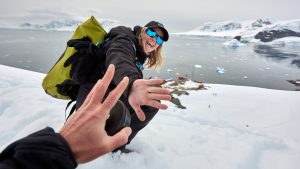 The EYOS team is both experienced and personable. Photo Reeve Jolliffe/EYOS

Prices begin at 25,000 Euros per person, and reach 50,000 Euros per person for the Owner’s Suite. This includes pre and post hotel nights in Chile, flights between Chile and Antarctica, all meals and drinks (including alcohol), and all onshore and onboard activities.