On October 31st the first DAMEN SeaXplorer luxury expedition yacht emerged from the building hall in the Netherlands. When the 62-meter custom-designed yacht is handed over to her owners in early 2020, she will be the first delivery in this groundbreaking series of yachts.

The SeaXplorer range was introduced in 2015, a crossover innovation created by a top team of experts including the SeaXplorer design team, the Damen Research Laboratory, Azure Yacht Design and EYOS Expeditions. Carlo Torre of Monaco Yacht Temptation created the interior design.

EYOS contributed hundreds of criteria during the design phase, contributing its hard-won expertise based on over a thousand expeditions. As such, expedition capability and functionality is a core part of the yacht’s DNA, making the vessel a true globally capable expedition yacht unlike any other. 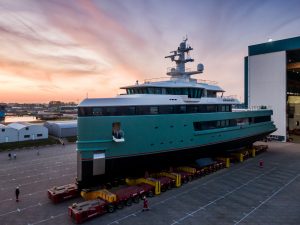 The vessel has expedition facilities for 30 days of autonomy, a fully certified helideck and helicopter hangar, plus two large tender garages and a dive store. The power generation consists of a Siemens BlueDrive system with three variable speed generator sets and DC bus. In combination with electrical propulsion motors and a battery pack, the yacht has an economical and environmentally friendly configuration.

Outfitting of the SeaXplorer took place at the Vlissingen East yard, located just a few kilometres from the Vlissingen City yard where AMELS yachts are completed.

The second in the line, a 77 meter SeaXplorer, will be delivered next year. 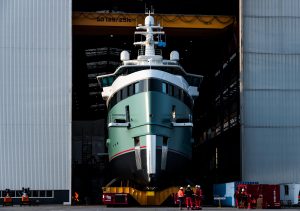