EYOS Expeditions has completed a highly successful expedition to the wreck of the French submarine S647 ‘La Minerve’ which sank in 1968 with all hands. The expedition’s purpose was to complete a forensic investigation of the wreck and to place a commemorative plaque on behalf of the families of the 52 crew who were lost at sea.

EYOS Expedition Leader Rob McCallum said, “We are honored to be able to help bring some sense of closure to the families of those lost in this tragedy. With our partners Caladan Oceanic and Triton Submarines, we are uniquely positioned to help illuminate and solve some of the mysteries of the deep and hope this investigation will help those seeking answers.”

The expedition was undertaken with the family of those lost and in firm cooperation with the French Navy and the Department of Sub-Aquatic Archeology (DRASSM). Two dives were completed. The first dive was an investigative dive undertaken with Rear Admiral Jean Louis Barbier (Rtd) previously of the French Submarine fleet and an authority on the sinking of the Minerve. Explorer Victor Vescovo from Caladan Oceanic piloted both dives and placed the commemorative plaque at the site.

“This has been one of the best experiences of my life. The dive gave me a comprehensive view of the wreck and will allow me to progress and come to a conclusion about the loss of La Minerve,” said Admiral Barbier.

A second dive was undertaken with Mr. Herve Fauve, the son of the Captain of La Minerve. “This is a very big day for me; I cannot find words to reflect my intense emotion. An old and impossible dream has become a reality.” 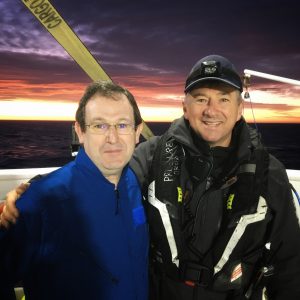 Herve Fauve, the son of Minerve’s Captain, on deck with Rob McCallum.

History of the Wreck

The submarine Minerve is located 30 miles off the coast of Toulon, France and lies at a depth of 2,300m. The wreck consists of three main parts and associated debris field spread over a 300m area. The 58m Daphne class attack submarine S647 was launched in 1961 and lost in 1968. The submarine sank during heavy weather while maneuvering underwater on her snorkel. A snorkel is a device that provides air down to a submerged submarines engine. The cause of the accident has not yet been determined but the discovery of several key components during the recent expedition will greatly assist investigators. 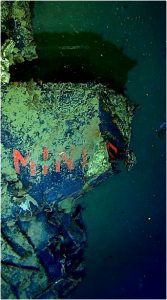 The sail of the wreck of the Minerve

McCallum added, “This has been a wonderful cooperative effort; with all parties unified to achieve a common mission. It was a very special moment when the son of La Minerve’s Captain placed a plaque at the wreck site. Translated, the plaque read “Sailors of the Minerve, we have been looking for you. We have never forgotten you. Your Families, Your Brothers in Arms, Your Friends.” 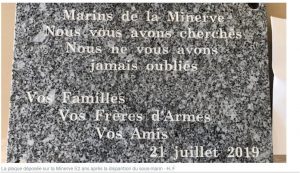 The plaque that was placed on the Minerve.

At the conclusion of the expedition the DSSV Pressure Drop came to a halt over the site and flowers were laid to honor those lost 52 years ago.