Kelly Walsh, 52, today completed a historic dive to approximately 10,925m in the Challenger Deep. Walsh dove in the Western Pool, the same area that was visited by Kelly’s father, Captain Don Walsh, USN (Ret), PhD, who was the pilot of the bathyscaph ‘Trieste’ during the first dive to the Challenger Deep in 1960. Mr. Walsh’s 12-hour dive, coordinated by EYOS Expeditions, was undertaken aboard the deep-sea vehicle Triton 36000/2 ‘Limiting Factor” piloted by the owner of the vehicle Victor Vescovo, a Dallas, Texas based businessman and explorer.

The expedition to the Challenger Deep is a joint venture by Caladan Oceanic, Triton Submarines and EYOS Expeditions.

Mr. Vescovo and his team made headlines last year by completing a circumnavigation of the globe that enabled Mr. Vescovo to become the first person to dive to the deepest point of each of the worlds five oceans. 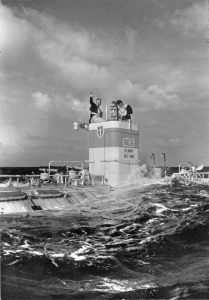 Captain Don Walsh and Jacques Piccard onboard Trieste in 1960

The dives by father and son connect a circle of exploration history that spans 60 years.

“It was a hugely emotional journey for me,” said Kelly Walsh aboard DSSV Pressure Drop, the expedition’s mothership. “I have been immersed in the story of Dad’s dive since I was born– people find it fascinating. It has taken 60 years but thanks to EYOS Expeditions and Victor Vescovo we have now taken this quantum leap forward in our ability to explore the deep ocean. 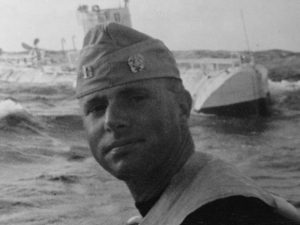 Captain Don Walsh next to the Trieste

“The leap in technology from 1960 is immense. Dad spent 20 minutes on the bottom and could see very little. I spent 4 hours on the bottom with excellent lighting and a 4k camera running the whole time. We had complete control over our vehicle; great lighting, manoeuvrability and a comfortable cabin whereas Dad had none of those things. The ‘Limiting Factor’ is an amazing vehicle; a true platform for exploration and a credit to the ‘out of the box’ innovation at Triton Submarines.” 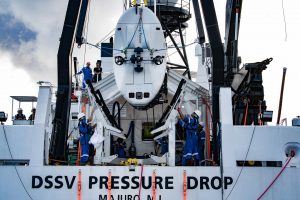 Dr. Walsh is a longtime active member of EYOS’ Advisory Board, where he helps connect the company to the latest developments in modern exploration and science. Walsh was onboard Pressure Drop last year when Vescovo made his first record setting dive and was on deck to congratulate him upon returning to the ship.

He commented, “Kelly’s Mom and I are so pleased and proud that Kelly got to experience the same adventure I had 60 years ago with the Navy’s Bathyscaphe Trieste.  He grew up with the continuing story of my history with deep ocean exploration, and now he’s part of it.”

EYOS Expeditions, which has planned, managed and lead all of the expeditions, specialises in technical expeditions and its co-founder Rob McCallum is regarded as a world expert in leading deep-water exploration mission. “This submersible is the pathfinder to the last frontier on Earth” said Expedition Leader Rob McCallum (New Zealand). “We live on a planet that is 71% covered in seawater, with an average depth of 4,000m; this remarkable vehicle is the only craft on Earth that can reach the bottom of the seafloor in any ocean.”

Kelly Walsh becomes the 11th person to have visited the Challenger Deep; 12 humans have visited the surface of the moon. Described by EYOS Expeditions as ‘the most exclusive destination on Earth, the depth of Challenger Deep is 6,000ft more than the height of Everest. McCallum said, “The sub is down almost at 36,000ft/11,000m — that’s about the same as the cruising altitude of a commercial jet. Next time you fly, look down and try and spot a car…it will demonstrate just how far down this sub goes.”

The Challenger Deep was visited by Don Walsh (USA) and Jacque Piccard (Switzerland) aboard ‘Trieste’ in 1960, by James Cameron (Canada) in 2012 aboard ‘Deep Challenger’ and then again in 2019 by Victor Vescovo (USA), when the two-occupant submersible Triton 36000/2 ‘Limiting Factor’ launched a new era in deep ocean exploration by proving itself as a reusable vehicle. 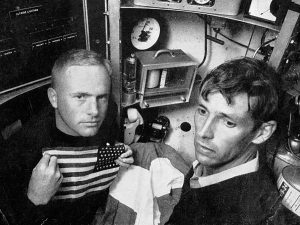 Walsh and Piccard inside the Trieste

The submersible is the first of its kind to have a certification of ‘Depth Unlimited’ and has since delivered nine individuals to the Challenger Deep; the deepest point in the world’s ocean. The submersible keeps its two occupants safe thanks to a 90mm thick titanium pressure hull and a life support system capable of 96 hours of life support.

“This vehicle is the culmination of a dream,” said Patrick Lahey (CEO Triton Submarines).

“I have long dreamed of building a submersible that could reach the holy grail of sub-sea engineering; full ocean depth. Yet here we are, with a reliable, reusable, efficient vehicle that is destined to make hundreds of important discoveries in its lifetime”.

The DSSV Pressure Drop will complete her Challenger Deep operation in late June and will then commence a dive series in the Northern Mariana Trench.

Victor Vescovo said “There are several deeps there that are below 10,000m; none have been visited by humans. We intend to explore them in association with our partners at the US National Oceanic and Atmospheric Administration (NOAA).”

Rob McCallum said, “It has been an honor to have Dr. Walsh on the EYOS Expedition Advisory Board for many years. To have had the opportunity to help guide his son Kelly Walsh to full ocean depth has been a tremendously rewarding experience for all of us”.

Kelly Walsh said, “My father and I dived in the same place, but with very different technology.  My dive heralds the next generation of deep-sea exploration; we now have the technology to explore any part of our ocean. No one could be happier about this than my father or me”

“This has always been a dream….and now it is a reality. That said, it is still unbelievable. I am grateful to Victor and his teams from Triton Submarines, EYOS Expeditions and Caladan Oceanic for making this possible”. 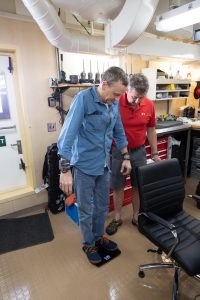 Victor Vescovo said “It is such an honor to take Kelly Walsh down to the bottom of Challenger Deep where his father, Don, went sixty years ago. It is wonderful to see the enduring spirit of exploration embodied in the Walsh and Piccard families. I’m so happy I could help this great, multi-generational story, happen.

“We spent 3 hours 10 minutes on the bottom, conducting an almost two mile west-to-east transect of the Western Pool of the Challenger Deep. No human has been there since 1960 when the Trieste dove there. That is too long between visits, if you ask me. We really need to invest more resources towards conducting deep ocean research.” 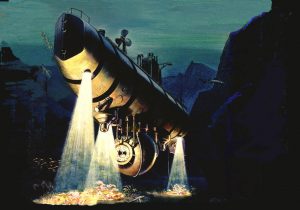 A painting of Trieste that was on Popular Mechanic’s cover