EYOS Expeditions has announced the successful completion of the Five Deeps Expedition, named as the most ambitious exploration expedition of the century. The primary purpose of the expedition was to conduct manned dives to the deepest point of each of the world’s five oceans and conduct scientific discovery along the way.

The expedition included a full circumnavigation of the globe, including visits to both the Arctic and Antarctic, for a grand total of 47,000 nautical miles. In addition to achieving its primary and secondary mission objectives, the expedition also conducted additional scientific dives in the Tongan and Puerto Rico Trenches and five dives on the RMS Titanic.

Overall, 39 dives were conducted, and numerous world records and world firsts were achieved. Not only did the expedition reach a new world depth record of 10,924m, it also conducted the first ever human visits to the bottom on the Southern, Atlantic, Indian and Arctic Oceans.

Rob McCallum, EYOS Expeditions Founder and Five Deeps Expedition Leader said, “This was a very complex and fast paced expedition. Although the EYOS Expeditions team have together completed over 1200 expeditions, this one drew on all of our experience and involved most of our key staff. We deliver around 60 expeditions a year for our clients, and all of them require a customized approach and focus on every detail. It’s a well proven recipe.”

In addition to planning, managing and leading the expedition, EYOS Expeditions coordinated all the logistical support, team travel and permits.

McCallum added “The scale of the undertaking surprises most people; we have coordinated over 1,100 flights, dealt with 54 Government entities and had to provide logistical support to some of the most remote parts of the world.

The Five Deeps Expedition provided a fun challenge and great privilege; it was a rare opportunity in the modern age to develop, plan, manage and lead a major voyage of discovery.

EYOS Expeditions was perhaps the only entity in the world with the experience in oceanic diving and remote-location expeditions that could coordinate a project of this size and scale.” 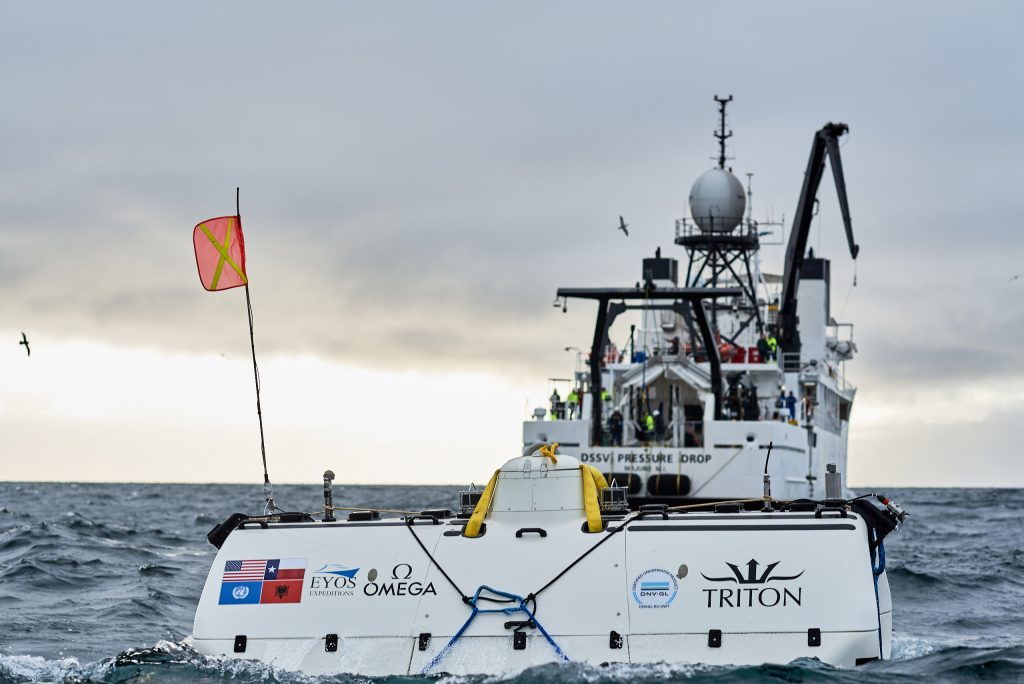 Preparations for the expedition included the design and manufacture of a two-man 36000/2 submersible by Triton Submarines of Florida. This vehicle became the first and only submersible in the world classified with a ‘Depth Unlimited’ rating. Capable of reaching any ocean depth for an indefinite number of dives, the submersible is the pathfinder into Earth’s last frontier, the hadal zone. (i.e. the ocean below 6000m).

The expedition’s primary platform, the 68-meter vessel DSSV Pressure Drop, underwent a $15 million refit to prepare her for her global voyage and oceanic extreme-depth diving operations. She was equipped with a full ocean depth sonar mapping system, 4 tenders, 3 scientific landers, a submersible hanger and additional berths for the 47-person expedition team.

Ben Lyons, EYOS Expeditions CEO said “We are literally seeing vast swathes of our planet for the first time. The maps were used by the expedition team to identify and confirm the deepest point in each ocean, and to aid the navigation of the submersible. Before the dives, the maps provided us with a great planning tool. We could look at the bathymetry and plan our approach to each trench. Without them we would have been almost flying blind”.

The Expedition Team was divided into six distinct teams: ship’s operations, submersible operations, sonar mapping team, science team, hotel team and film production. EYOS Expeditions sourced many of the team members and was responsible for the onboard management and leadership of the expedition. 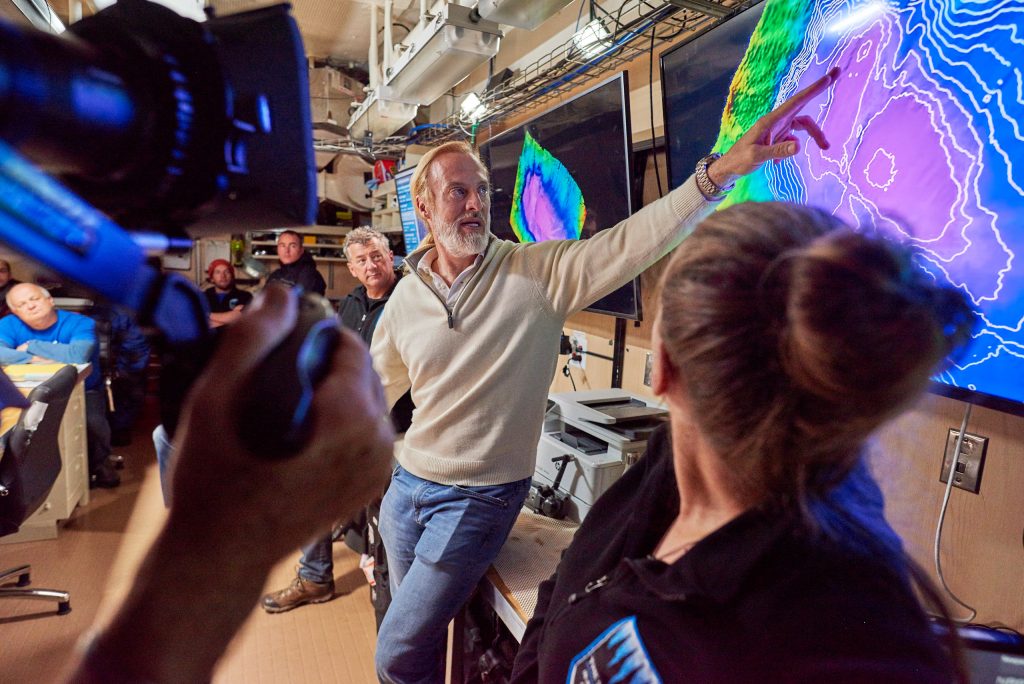 Victor Vescovo reviews bathymetric data before a dive during the Five Deeps Expedition.

The expedition by the numbers: