Following the successful completion of the historic dive that made her the world’s most vertical person and first woman to reach the deepest point in the ocean, astronaut Dr. Kathy Sullivan has joined the EYOS Advisory Board.

Embodying the spirit of EYOS

Becoming the first woman to reach Challenger Deep is far from the only ‘first’ of her career.  One of the first women selected for the NASA Astronaut Corps, Dr. Sullivan became the first American woman to complete a spacewalk as a member of the Challenger Space Shuttle crew in 1984.  After leaving NASA in 1993, Dr. Sullivan went on to serve as Chief Scientist and then some years later, as the Administrator of the National Oceanic and Atmospheric Administration (NOAA).

During a talk at the Smithsonian National Air and Space Museum, Sullivan explained her move to NOAA, saying ‘What motivated me to leave my space-faring career and come back to Earth was the passion and commitment to make the space perspective matter, to transform our understanding into useful knowledge, and put it to good practice in the interest of improving life on Earth.’

Dr. Sullivan has certainly been an instrumental figure in the fight to preserve the health of our oceans and, in addition to her impressive list of qualifications, she wholly captures the pioneering spirit EYOS embodies.  As a member of the Advisory Board, Dr. Sullivan will accompany selected EYOS expeditions to help facilitate vital discussions on climate change, science and ocean conservation. In addition, she will be an invaluable resource for future expeditions EYOS leads in the scientific and exploration arena, helping connect the company to new technology, missions and thinking. 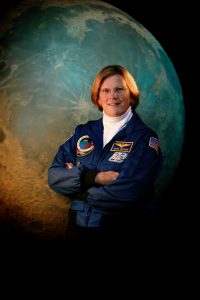 Dr. Kathy Sullivan, the first American woman to perform a spacewalk & the most vertical person in the world!

EYOS expedition leader Rob McCallum described Dr. Sullivan’s dive, and subsequent call with the International Space Station, as “a new ‘first’ for the company, a tall order to fill with EYOS’ vast catalogue of past clients who have been extremely ambitious in their quests to explore.”  Of Dr. Sullivan, Rob said, “Kathy is a terrific shipmate, intellectually curious but brimming with the joy and fun of discovery and a passion for science and the natural world that would be hard to match.”

Dr. Sullivan said, “It was a real joy to work with the team at EYOS as they organized and led the Ring of Fire expedition. Deep ocean exploration is the next untouched landscape as we continue discovery on our own planet, and I look forward to helping EYOS continue to lead the way on this vital endeavor.”