Writer Elissa Polls joined EYOS aboard Nansen Explorer heli-skiing in Greenland, and wrote about it in the November 2022 issue of Departures Magazine.

“They have raised the bar on exploration travel,” she writes about EYOS. Polls described the exhilaration of having breathtaking peaks and virgin snow all to herself: “Standing atop a mountain without another soul in sight; it takes your breath away.”

To inquire about carving your own fresh tracks on a yacht-based Greenland hello-skiing expeditions, contact info@eyos.com.

There is something magical about carving tracks into a fresh mountain of snow – the stillness of the moment before anyone else makes their way down the same run, that first turn marking your territory.  Snowboarding dominated my extracurricular time during my college years in Boulder, Colorado, with weekends spent convincing friend to rise before dawn to beat the traffic on I-70 and head up to the mountains.

After I graduated, real life began, and over time, I deprioritized snowboarding.  As my days on the mountain diminished, so did my confidence.

When presented with the opportunity to heli-ski with EYOS Expeditions in Greenland, one of the most remote heli-skiing locations in the world, I was instantly filled with excitement, trepidation, and fear.  I’ve always associated heli-skiing with Warren Miller films like “Higher Ground” and “Playground”, where intrepid athletes take on extreme conditions.  But I hadn’t been on a snowboard in years.  Ben Lyons, EYOS Expeditions’ CEO, convinced me to chat with one of the heli-skiing guides to discuss my apprehension.  Twenty years of snowboarding wasn’t enough for me to pack my bags.  My overly cautious nature demanded some reassurance from the person who would be guiding me down the mountain. 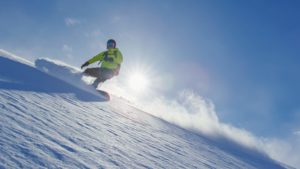 He directed me to Doug Stoup, one of EYOS’ most experienced expedition guides and skiers.  “You will be great!” Doug said, like we were talking about my ability to pack enough warm clothes.  After my third of fourth “Are you sure?” he simply replied, “It’s incredible.  See you in Greenland.”  I set off to assess the warmth of my current wardrobe.

EYOS Expeditions offers an array of experiences in some of the most remote places on earth, including Antarctica, Madagascar, Indonesia, and the Arctic.  They have raised the bar on exploration travel, and everyone I spoke with on their team seemed passionate about what they do, providing guests with unforgettable, luxury adventures.

Still, from my home in California, Greenland is far away – very far.  Anyone traveling on a commercial airline to the island country should expect an overnight stay in Denmark followed by one or two domestic connections, depending on the weather.  Flights to and from Greenland are in short supply – and if the weather turns, your departure or arrival may be affected.  Only those with a true appetite for adventure travel, and a breezy attitude toward things like storms, lost luggage, and spartan layover accommodations, should embark on an arduous journey like this.  After reaching your destination to board the boat, options for extra or missing gear are limited, if not impossible, to track down.  This was my particular fate after my bags ended up on their own disparate journey, such that I had to scramble to buy new gear in Copenhagen before my connecting flight. 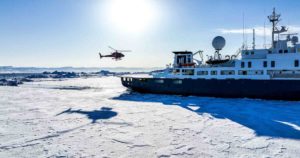 Once we arrived in Greenland, our home base was the Nansen Explorer, a former research vessel with a deceivingly rugged exterior.  But I soon learned that over the years she had undergone some extreme alterations.

“The boat was built in 1983 in Finland.  It was built for the Russian government for science and research,” explains Audun Lie Dahl, the CEO of Nansen Polar Expeditions, a partner of EYOS.  “Then it was transformed into a casino ship that sailed between Russia and Japan.  In 2002, a Norwegian company bought the ship and rebuilt her as a surveyor ship for the governor of Svalbard.”

The Nansen’s impressive resume was enough to convince EYOS that she had the power for their expeditions.  “We knew what she was capable of; she was good in rough seas and we knew she had very good ice strength,” says Audun.  “In addition, she had the helipad.  We immediately saw the opportunity to convert her from a ship that carried 80 people and took her down to the 12 guests plus the crew.”

Guests can choose from seven staterooms with floor-to-ceiling windows, perfect for observing icebergs, wildlife, and glistening snow.  And if your body is begging for more after a day of kayaking, paddle boarding, heli-skiing, or feasting on world-class food prepared by one of the outstanding chefs, the Nansen is equipped with a gym.  On one ambitious day, I joined a yoga class led by a friendly crew member from Sweden named Bintu.

We boarded the Nansen in Sisimuit, Greenland’s second-largest city (with a population just over 5,500), filled with picturesque multicolored houses stacked among the mountains.  As we prepared to leave the port, Captain Timo invited guests and crew to the ship’s bridge, or control center, to watch her break through the pack ice.  With her every maneuver, the ocean transformed into a mosaic-like work of art.

As soon as the weather cooperated, our first heli-skiing operation was underway.  In preparation across the previous days, I was trained in backcountry and helicopter rescue.  Never in my life had I imagined the possibility of needing to initiate a beacon or digging someone out of an avalanche.  After the helicopter dropped off my group for our first run, I was so taken aback by the views of the mountains that my jitters eased. There is something surreal about standing atop a mountain without another soul in sight; it takes your breath away.  I looked to Doug for one more nod of reassurance before strapping into my snowboard and heading down into truly uncharted terrain.

The first thing I noticed was the snow; it was so otherworldly it seemed like gliding on top of twinkling crystals.  The nervous shaking in my leg eventually stopped, and I started to relax and let the snow do most of the work.  I felt like I was floating, a sensation I’d never experienced while snowboarding.  All of a sudden, my perception of heli-skiing shifted, and I realized I had nothing to be afraid of.  EYOS’ guides scouted runs that were challenging without being overly intimidating – they had a little bit of everything.  Halfway down one of the mountains, I glanced back to observe my fresh tracks.  The mountain resembled an abstract painting, our turns splattered across an enormous white canvas. 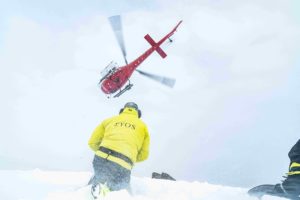 Several hours later, we retreated to the ship for a much-needed break and a barbecue with burgers, chicken, salads, and Champagne served on the ice.  Mother Nature demonstrated her strength as we dined alfresco on a sheet of ice beneath the Nansen’s 236-foot-long facade with 360-degree views of Greenland’s mountains.

Later that evening, two arctic foxes made their way across the ice just before sunset.  Everyone, including the crew, rushed to the bridge to catch a glimpse of the majestic creatures.  The foxes eventually disappeared into the white night, leaving only our boat, the ocean, and mountains of fresh powder.

Next post
‹ The Telegraph’s: Inside James Cameron’s deeply dangerous quest to reach the bottom of the ocean
Previous post
EYOS Partners with Ocean Conservation Exploration and Education Foundation (OCEEF) ›