EYOS Expeditions completed a historic season in the Northwest Passage this summer with five vessels sailing the historic High Arctic sea route. Three of these set out to complete the full ocean-to-ocean passage and all were successful. EYOS is the first company to manage three vessels completing the entire Passage in a single season.

Vessels working under EYOS guidance this summer in the Northwest Passage included a 47-meter motor yacht, two 50-plus meter sailing yachts, a 70-plus meter motor yacht, and the 196-meter residential ship, The World. Additionally, EYOS managed expedition operations for another seven yachts in Greenland, Alaska, Svalbard, and the Norwegian Arctic, making a total of twelve vessels, many with multiple expeditions, in the Arctic this season.

EYOS provided ice pilots for the yachts along with expedition guide teams that helped plan the itinerary, guided and managed safe shore landings and activities, providing polar bear protection throughout. EYOS also completed permitting for each of the vessels operating in the region, navigating the multi-layered system from the local, provincial and federal levels.

Ben Lyons, EYOS Expeditions CEO said “The Northwest Passage is an iconic waterway – a true challenge not to be taken lightly by any vessel. Each of the vessels and their crew that we worked with deserve congratulations for their historic achievement.”

Founding Partner Tim Soper was Expedition Leader onboard The World, the largest privately owned residential yacht on earth. In September 2019, The World completed its second Northwest Passage (NWP) transit sailing from east to west and becoming the largest ship ever to accomplish a “double transit” — the full passage in both directions. Soper also led The World’s first and record-breaking NWP transit in 2012 when it sailed the historic sea route from west to east. 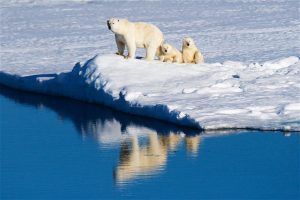 Soper said, “We had absolutely spectacular conditions throughout the voyage, from quietly observing polar bears hunting seals right in front of our Zodiacs to several nights with incredible Northern Lights lasting for hours, many narwhal sightings and fantastic mountain landings by helicopter. And while it is difficult to determine exactly, we believe The World’s transit was about the 300th in history—quite a milestone in itself.” 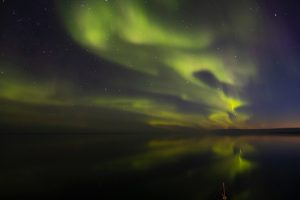 Aurora Borealis as seen in the Northwest Passage this summer Photo: C. Tennant

Lyons added “We can’t always plan exactly where the vessels will be each day as some passages or bays might be frozen solid. That allows us to take advantage of spontaneous and opportunistic occurrences, like encountering polar bears or bowhead whales, or the chance to kayak to a lost island in 90 minutes of bright sunshine. Guests will get to sail through grand fjords surrounded by towering mountain barriers; marvelling at the icebergs that dot the way. On vessels with helicopters, they get to soar over mountain peaks for a hike (or a glass of champagne) amidst awe-inspiring scenery. They will also land at rarely visited Inuit communities and come to better understand, first-hand, their way of life” said Lyons.

EYOS has unmatched expertise in the Northwest Passage and the full EYOS team has been involved with over 10% of all successful transits. The company places a strong emphasis on building amiable relations between the local communities and its visiting yachts. As funded by The World, this spring, while the north was still frozen over and iced in, EYOS sent its Director of Expedition Operations and Undersea Projects Kelvin Murray, along with one of its Inuit guides, to communities in the Northwest Passage to meet with the local communities.

“It was -32°C and fermented walrus was on the menu, but face-to-face meetings with locals are invaluable and improved our rapport. Regional communities quite rightly wield a lot of power because it’s their backyard we’re sailing through. They literally feed and clothe their families from these coastal areas,” said Murray.

Provisioning and bunkering as well as the complicated logistics of owners and guests joining the yachts in remote Arctic communities are also major components of the planning for a successful passage transit, and are among the various services that EYOS offers to its clients.

“You have to have an appreciation of where you are,” says Murray. “Quite simply, there’s no major port access after refuelling at either St. John’s in Newfoundland, Nome in Alaska or Greenland. “If you need Pak Choi and 2,000 Nespresso capsules, you’ll have to arrange transport and plan for what happens if fog delays delivery by plane.” Murray also sits on the board of the Association of Arctic Expedition Cruise Operators which creates guidelines for passenger safety, environmental protection and interactions with indigenous residents. 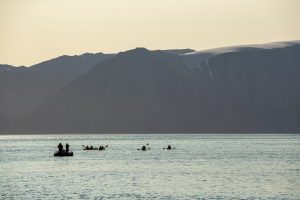