EYOS Expeditions staff have again led a successful expedition to the RMS Titanic, deploying the Triton 36000/2 submersible ‘Limiting Factor’ to conduct several dives on the wreck over a 10-day period. The wreck, which sank on 14th/15thApril 1912, lies in 3,800 meters/12,500 feet of water approximately 380 miles SE of St John’s, Newfoundland.

Expedition Leader (and EYOS Expeditions founder) Rob McCallum said “It is a privilege to be back and to enable clients to revisit the famed shipwreck. This is the first dive that anyone has done since our last dive in 2005. No one has seen the Titanic since and so we were anxious to check in and to monitor her condition, work with scientists who have monitoring stations onsite and to assist with the filming of a new documentary.”

The expedition was based aboard DSSV Pressure Drop, which is equipped with the world’s only unlimited depth (11,000m) submersible. In addition to the submersible, the ship is equipped with 4 tender boats and three deep water ‘landers’, or devices that are used for communication, tracking and transporting material to/from the surface.

The dive sequence began on 29thJuly 2019 when DSSV Pressure Drop arrived above the site of the wreck. Before the sub was launched, the crew held a memorial service on deck and laid a wreath over the side in honor of the over 1,500 people who died on the ship in 1912. Over the next week on site, five dives were made to the wreck to extensively document its current condition and appearance.

Lying almost 4,000 meters down in bitterly cold -1°C water, the wreck has become vulnerable from sweeping eddies and subjected to ever-changing sea currents. The wreck is being slowly consumed by the strong, deep currents that flow through the Atlantic here, along with natural salt corrosion and metal eating bacteria.

The Titanic was last dived and physically seen by a human in 2005 during an expedition also led by EYOS Founder Rob McCallum. In 2005, 20 dives were undertaken using twin Mir Russian submersibles, which were rated to 6,000m and carried a pilot and two guests. Until now, only 157 clients have had the opportunity to dive on the Titanic but many films and documentaries have been produced for a variety of international broadcasters.

In 2010, the Titanic was scanned with high-resolution sonar using a Remote Operated Vehicle. In addition to assessing her condition, researchers were able to place scientific experiments near the wreck and to conduct scientific research. Many of the experiments center around metallurgical samples, which are sacrificial pieces of metal that researchers use to track the breakdown of metal at these depths. The information is useful in predicting how shipwrecks break downover time. In addition, scientists monitored the biology around the wreck which serves as a large artificial reef. 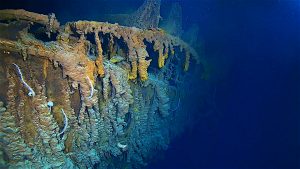 Rusticles on the RMS Titanic wreck

Following established U.S. legal protocols and under the observation of an on-board NOAA representative, the team of experts and scientists examined the remains of the ship capturing 4k footage for the first time and photogrammetry to assess the wreck’s current condition and project its future. The scientists of the expedition will publish the full results and a documentary film is being made by BAFTA and Emmy award-winning Atlantic Productions London.

McCallum added, “I think the Titanic is one of the most iconic and exclusive destinations on Earth. She is very difficult to reach because the logistics of working at 12,500ft while 370 miles offshore are challenging. A lot of people would like to do it, but diving on the Titanic is a complex and difficult undertaking, with currents up to 4 knots. Even though our onboard team has over 200 Titanic dives to their credit, we cannot take anything for granted. We plan every dive from scratch, and it is an immense honor and responsibility to have returned to the Titanic after so many years.”