Next up in our quest to share with the world a deeper look into the people of EYOS Expeditions, we speak with Director of Expedition Operations & Undersea Projects, Kelvin Murray.

Kelvin Murray, as at home leading a rugged expedition in some far-flung corner of the globe as he is serving on the AECO Executive Committee, brings with him a vast skillset. Finding out what brought Kelvin to the expedition travel industry, as well as what keeps him here, shines a light on what EYOS has that is so singular and unmatched.

-How did your journey into the expedition travel industry start?  Have you always felt the pull to travel the globe?

Ever since I was a wee boy I wanted to explore the oceans. Initially it was as a pirate and I would draw galleons sailing the high seas, then it was as a submariner – I even designed an undersea crawler that would drive off the beach near my home. Thankfully, I realized piracy wasn’t going to be a prudent choice, but I was always drawn – mostly by wildlife – into what was beneath the waves. I was – and remain – fascinated by whales and other marine mammals.  I also remember my Granny giving me a book on the Poles and the explorers who travelled to these extreme places, and that must have planted a seed.

It never really occurred to me that I could work as a diver, but when I first breathed underwater on scuba gear I realized that I’d found ‘me’.  Between my marine mammal conservation work, my love of diving, and fascination with cold places, it seems quite natural that I ended up working for the British Antarctic Survey (BAS), managing the UK’s scientific diving program in the Antarctic.  Shortly before deploying to the Antarctic, I met Tim Soper, now Founding Partner of EYOS, who was working as an Expedition Leader on expedition cruise ships.  When I left BAS, I went to work with Tim on the ships. I started out as diver, then quickly became an Expedition Leader, and then management.

-Where is your favorite place on earth to explore?

It sounds like a cliché, but ‘underwater’. I appreciate that statement doesn’t really narrow the field, however it doesn’t matter if it’s a small green bay in Scotland, a rocky island shore in Antarctica, or a reef basking in tropical sunshine, there is always something to see or find.  Now that I’m achieving my childhood dream and working more with submersibles (not pirate ships), a whole other world many magnitudes larger has opened up.  Being involved in dives to the bottom of Challenger Deep in the Mariana Trench is something I never imagined would be possible, but new technology (and a lot of hard work by EYOS and partners) is making the ocean more and more accessible.

-What is the most surprising thing you’ve encountered on an expedition?

I reckon a lot of people are drawn to remote and wild places by natural history programs and other such television. Certainly, I remain a big fan of Sir David Attenborough – and funnily enough, I also avidly watched Tony Soper’s program (Tim’s father is another iconic British TV naturalist).  What was surprising to me when I started going to places – a beach full of elephant seals in South Georgia; sea ice in Svalbard; diving with Leopard seals in Antarctica – was that I was essentially living the life of what I had seen inspiring onscreen presenters do themselves.  Experiencing these stunning wildlife moments was not only possible, but it was a far more powerful sensation. I have been less than 3 meters from the gaping maw of a polar bear, and that is something you never, ever forget.

-What is something you think most people don’t consider when they think about expedition travel?

I think people don’t consider or realize just how impactful these trips can be.  Of course, people get excited when preparing for a big trip, but they often get lost in the details and hustle of their busy working lives, plus packing and the myriad of things they need to do before joining the expedition.  They arrive, and they stop. If I have to, I make them stop.

In the brochure or on the website, you can’t adequately describe the sensation, the feeling, the experience of being in pristine wilderness.  I make people put down the camera, stop the excited chat, don’t move – just stop.  So rarely in our daily lives do we get the chance to be truly in the moment, and to do that on Arctic tundra or amongst brash ice on the Antarctic Peninsula… The effect is profound. People have a ‘moment’, people smile, people cry – simply by stopping and realizing where they are and what is around them. 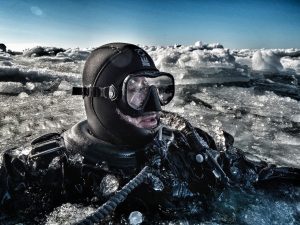 -What is the best part about the EYOS experience, in your eyes, for our guests?

All of the above!  Experience matters, it makes a difference – a significant difference.  All of our onshore team (and I use that term loosely as we are often in the field) come from an expedition or nautical expertise.  None of us are working here because it’s a ‘job’ – this is what we know, what we do, what we live and breathe.  Having that level of experience, expertise, passion, knowledge and enthusiasm building, preparing and guiding your trip is irreplaceable and vital.

-What initially drew you to EYOS?

EYOS works on such unique and special projects, which are far from mainstream and very appealing to my adventurous side.  I saw this as an opportunity for both of us.  I brought a lot of experience to the table in terms of operational management, control of complex logistics and specialist skills including polar diving.  In return, I work on exciting and challenging projects that satisfy my need to work in these special wildernesses plus contribute to a bigger picture.  In addition, I had already worked with several of the team and knew this was a good expedition ‘family’ to be involved with.

-What drives you to continue to travel to remote places?

It is in human nature to explore, which is why we strive to reach the bottom of the oceans and fly into outer space.  Some are drawn to it more than others, but for me I’d say it is an intrinsic part of me.  Ever since I was a child, I’ve been connected to nature and wild places, and to be in or on the water.  I can be selfish and say it’s all about what I need, but there’s also something really special and important about sharing these places with others – guiding them to tread softly and really appreciate where they are.  Hopefully without sounding too corny, it’s also important for me to help preserve and protect these places.  This is my own philosophy and something I instill in my own children.

-What do you consider to be the most valuable reason for expedition travel?

Broadening your horizons also broadens your mind. There are some incredible places on our planet that need to be seen to be believed, and at the same time they need to be cherished and protected.  Responsible, sensitive expedition travel can be a very powerful tool for gaining a sense of perspective and the bigger picture, and for inspiring conservation and protection. 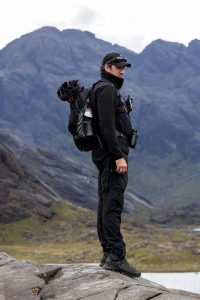 -How does your work at EYOS support your passion for preserving the wild corners of this planet?

EYOS does so much more than simply ‘take people on holiday’ – our work regularly involves scientists and researchers hoping to understand more about our planet; we support conservation campaigners seeking solutions; we encourage influential individuals and organizations to participate.  Some of our clients have made outstanding contributions to conservation causes as a result of our expedition with them.

I also sit on the Executive Committee of AECO, as well as other working groups and committees, where I collaborate with industry colleagues to promote safe and environmentally responsible expedition travel.  I’m directly involved in encouraging many of the travelling public and local communities in becoming ambassadors for wild places and doing the best they can to protect them.  We see real, hard evidence of a changing world around us, but also how people can make a difference. It’s important and that’s why it’s a passion.