EYOS is excited to announce that Bode Miller and Chris Davenport will be special guest guides for one of our heli-ski expeditions to Greenland this spring — a not-to-be-missed opportunity.

Being the most accomplished male alpine skier in U.S. history is only part of the Bode Miller story, as any ski aficionado knows.  One of the greatest World Cup racers of all time, he is the only skier with five or more victories in four different disciplines: giant slalom, combined, super-G and downhill. 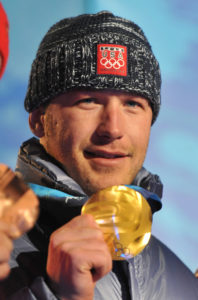 TYWHC1 Gold medalist USA’s Bode Miller poses with his medal during the victory ceremony for the Men’s Super Combined during the 2010 Vancouver Winter Olympics in Whistler, Canada on February 21, 2010. UPI/Kevin Dietsch

Chris Davenport is a two-time World Champion skier and the first person to ski all fifty-four of Colorado’s 14,000-foot peaks in less than one year. He has numerous first descents of peaks around the globe under his belt, including guiding and skiing on Mt. Everest.

Ben Lyons, CEO of EYOS, says, “We had originally planned this with Bode Miller for 2020, but had to postpone due to COVID.  We are elated to now create the opportunity for skiers to, as Chris says, ‘find beautiful lines in incredible locations.’ To have Bode and Chris onboard is an unbelievable combination; both are fantastic ski partners and great après ski companions. To share this full-custom adventure with them on the 12-guest expedition yacht Nansen Explorer is next level. With an ice-strengthened hull specifically designed for polar waters, and a commercially certified heli deck, Nansen Explorer is the ideal ‘lodge’ and launch pad for other-worldly ski adventures
and exploring Greenland’s epic wilderness.”

As experienced guide, Doug Stoup, attests, “After months of winter storms, as spring arrives in the Arctic, there is amazing skiing to be found along this vast coastline, with new peaks and new routes waiting to be discovered, so there is no shortage of opportunity to make fresh tracks.”

Limited availability. Book soon to capture your choice of 6 cabins.