Following the historic Five Deeps Expedition and the current Ring of Fire Expedition, Caladan Oceanic’s Hadal Exploration System (HES) is being offered for sale exclusively through EYOS Expeditions. The HES is the only scientific platform specifically designed for work in the deep ocean ‘hadal zone’ and the submarine is the only vehicle certified with an official ‘Depth Unlimited’ rating.  Able to dive repeatedly to 11,000m, the submersible is uniquely capable of reaching any depth, in any ocean and to do so for an indefinite number of dives. The package is listed at an asking price of $49.8 million which is based only on its actual design, construction, and shakedown costs.

Rob McCallum, Founding Partner at EYOS and Expedition Leader onboard Pressure Drop for the last 18 months, said, “The HES was created for much more than just breaking world depth records. The HES will be the pathfinder to the last frontier of exploration on Earth– the Hadal Zone.

The discoveries that will be made from this vehicle during its lifetime will be measured in the hundreds, perhaps thousands. It is a remarkable craft and the most potent tool for ocean science in the world today.”

The sale will include the Research Vessel DSSV Pressure Drop (which is equipped with one of the world’s few sonars capable of mapping full ocean depth), the Triton 36000/2 Submarine ‘DSV Limiting Factor’ (the world’s first unlimited depth submersible), three custom built landers (used for navigating the submersible as well as scientific sampling), and access to a world record breaking, ‘best in class’ team. 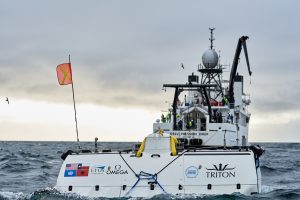 The HES and Five Deeps expedition was recently profiled in the New Yorker magazine (https://www.newyorker.com/magazine/2020/05/18/thirty-six-thousand-feet-under-the-sea), which details the challenges of developing and introducing new technology in one of the harshest environments on Earth as well as the potential for scientific discovery from the submersible. McCallum commented, “Limiting Factor is an incredible tool, designed by Triton Submarines who are the engineering champions of the personal submarine industry. They have defined a new boundary of what was technically possible underwater, and I don’t know any other company with the foresight or expertise to build such a remarkable vehicle.”

The HES is uniquely placed to undertake charter missions for a wide range of tasks on the seafloor and will be considered attractive to charterers from both the international community of ocean philanthropists as well as government supported science institutes for exploration, search, discovery and retrieval missions. It also has serious ongoing commercial capabilities including adventure tourism and filmmaking. In February of 2020, Prince Albert II of Monaco dove to the bottom of the Mediterranean Sea in the Limiting Factor, making him the deepest-diving Head of State and attesting to the craft’s safety. 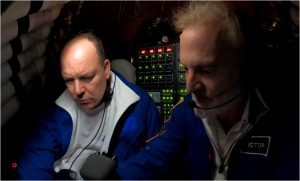 McCallum added, “People often ask: What will you find? What will you discover? The answer is broad, and frankly, unpredictable given how little is known of the deep ocean. It stretches from completing our understanding of evolution, all the way to discovering the answers that will help ensure our future survival with new medicine or biological solutions.

Without a doubt, however, this is the most unique opportunity in modern exploration. It is a chance to buy a turn-key, record breaking, high profile asset that has been proven in every ocean and every depth. The possibilities are so broad we’ve listed five possible adventures or discoveries that await the future Owner of the HES.”

The Tonga Trench lies between Samoa and New Zealand and, at 10,810m deep, is the second deepest place on earth. In the trench is the Osborn Seamount, which is the summit of a flat-topped seamount at 2,000m deep. This makes it the biggest vertical wall in the world. An expedition focussing on descending this entire wall would provide an unprecedented insight into how diversity and adaptation changes with depth.

Every dive into the Hadal Zone presents the opportunities to make new discoveries, whether they be new species, new landscapes, or new ecosystems. For an explorer, these provide the opportunity to not only name a species or a geographical feature, but to find the answers to some of science’s most pressing questions. The HES is a very important tool at a time when humankind must embrace science to find solutions to tomorrow’s challenges.

Many of the hadal species are thought to have originated in Antarctica where three trenches (South Orkney, South Shetland and South Sandwich) lie completely unexplored. Diving in polar waters is both challenging and rewarding and is the very cutting edge of modern-day exploration.

It was only as recently as 1979 that deep water scientists discovered an entire new ecosystem– hydrothermal vents. These jets of superheated water, unable to boil due to the huge pressure, provide an entire community of creatures with nutrients through the process of chemosynthesis. It was an unexpected discovery and completely foreign to life above the waves which is based on photosynthesis. Who knows what other ecosystems lie awaiting discovery?

3. Missions to the RMS Titanic

Shipwrecks continue to hold an unending fascination with mankind, and none more so than the RMS Titanic.  No other private vehicle is currently certified to access the RMS Titanic, considered one of the most beautiful ships of all time. Her hull lies upright in 4,000m of water, a historic time capsule to 1912. The HES dove the wreck five times in nine days in 2019. 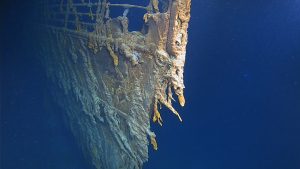 The massive naval battles of World War II defined the outcome of the War in the Pacific. Many of these gargantuan vessels lie preserved in the cold, dark waters in the Hadal Zone.

Locating, filming and documenting these vessels is the last chapter in their proud histories, and would allow families a final degree of closure. Hundreds of naval and commercial wrecks are waiting to be discovered as almost all shipwrecks below 4,000m have been inaccessible to man until now.

Some of the most magnificent geological formations on our planet lie hidden beneath the sea. In some cases, they span impressive distances both above, and below the waves. Hawaii’s monster volcano, Mauna Kea rises over 10,000m from the Pacific Ocean’s seafloor up to its lofty peak, 4,207m above the surface. This continuous slope makes it the tallest mountain on Earth and with the HES it would be possible to dive to the base and then ascend to the summit in a single day.