A one-of-a-kind company like EYOS requires extraordinary people behind the scenes – in the Faces of EYOS Question and Answer series we interview EYOS personnel.

There’s no other company in the world that is exactly like EYOS Expeditions; the depth of experience and breadth of specialties is unmatched.  And without the singular and dynamic group of people behind the organization, there would be no EYOS.

From a former UN technical advisor, to a veteran of some of the world’s most prestigious yachts, to a travel writer/MBA, over the next few months we will be shining a light on the people that make EYOS, EYOS.

A Dreamer With a Head for Logistics

We are kicking off this series with Rob McCallum, one of EYOS’ founders.  Rob is a rare mixture of fantastic dreamer and grounded, strategic planner.  He also happens to be one of the world’s leading experts in private submersibles and undersea discovery.  Getting a glimpse of what makes him so passionate about remote travel and what prompted him to co-found EYOS Expeditions offers insight into how EYOS has grown over the years.  Read on to take a close look at Rob McCallum’s life and career.

Rob McCallum pores over charts and data to ensure a successful dive during the Five Deeps expedition. Photo: Reeve Jolliffe

–How did your journey into the expedition travel industry start?  Have you always felt the pull to travel the globe?

My career has always been about making complex projects happen in remote places—initially for the New Zealand national parks service, then for the UN, then technical expedition companies and now in private expeditions.

My travel bug started early; as soon as I finished university I spent 9 months trekking through South America. Straight after that we headed for Everest.

-Where is your favorite place on earth to explore?

Anywhere with wildlife!   It’s very hard to beat Antarctica; it gets under your skin and into your brain and keeps bringing you back. However, I was raised in Melanesia and I have a thing about remote atolls and the amazing diving opportunities they contain.

-What is the most surprising thing you’ve encountered on an expedition?

I love the natural power of volcanics; on one of our expeditions a few years ago, we chanced upon an eruption of the submarine volcano ‘Kivachi.’ I say chanced, but there was planning  behind it, and fate smiled on us that day. It was simply awesome to be at sea and watch the ocean erupt!  On the same trip we had our group on the windward side of an erupting volcano at dusk….you just can’t beat that.

-What is something you think most people don’t consider when they think about expedition travel?

People often come preloaded with expectations….but the enduring memories are most often generated by the unexpected.  The little opportunistic moments that are unscripted and authentic— well, you just have to be there in that place at that time. 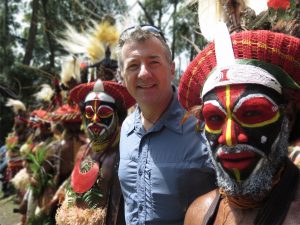 -What is the best part about the EYOS experience, in your eyes, for our guests?

We are authentic.  The EYOS guide on your expedition will be a world class expert, with HUGE experience; yet they are also great company and fun.  After folks have done a trip with us they trust us; I often get calls from clients who say “That was awesome; where do we go next?”

-What initially drew you to found EYOS?

I was heavily involved in technical expeditions and larger commercial expeditions.  The idea of offering private expeditions to superyacht owners, their guests and charters seemed like a great idea….and it was!  We have had so much fun….and we have a really cool clientele who simply love to explore the remote and pristine parts of our planet.

-What drives you to continue to travel to remote places?

The genuine love of exploration– the pure delight of seeing what is around the corner, over the rise or beyond the horizon.  On our 5 Deeps and Ring of Fire Expeditions, we are literally taking people where no one has ever gone before – that is true discovery!  But also the connectivity. i.e. the more you explore the smaller the planet becomes.  We are all interconnected and over time those connections become more obvious, and more important.

-What do you consider to be the most valuable reason for expedition travel?

Our clients are wealthy but also quite influential; they are opinion leaders, decision makers and often philanthropists.  They are uniquely positioned to make contributions to science, to conservation and to raising the profile of the key images that face our planet.  Time in these remote and pristine places gives them another point of calibration…something that can be useful back in the Boardroom.

-How does your work at EYOS support your passion for preserving the wild corners of this planet?

Before I became a professional expedition leader, I was a conservation manager for 20 years; my M.Sc is in conservation management and I was a technical advisor to the UN in conservation operations.  I see the two career paths as interwoven.  We conserve what we value and we only value things that we understand.  For instance; it has been a real privilege to see highly successful business leaders voyage to the polar regions and see (firsthand) that climate change is a real and urgent priority issue.