Victor Vescovo and team have completed the fourth mission of the expedition in world’s deepest diving operational submersible, the Limiting Factor, in a historic expedition led by EYOS.

For the fourth time, the Five Deeps Expedition has successfully dived to the bottom of one of the world’s five oceans. The team completed a mission to reach what is commonly known as the deepest point on planet Earth: Challenger Deep within the Mariana Trench. Victor Vescovo set a new deep-diving record and is the first human to make multiple dives, solo, to its hadal depths in the DSV Limiting Factor (Triton 36000/2 model submersible) the world’s deepest diving, currently operational submarine. The expedition reached a maximum depth of 10,928 meters/35,853 feet deep, 16 meters/52 feet deeper than any previous manned dive.

EYOS co-founder Rob McCallum was Expedition Leader onboard and said, “It has been a monumental week for ocean exploration; we have broken world records and achieved a number of world firsts. Most importantly we have opened the door to the final frontier — the exploration of the hadal zone and the workings of the deepest parts of the world’s oceans.

“This vehicle is effectively a reliable elevator that can transport us to any depth, in any ocean. During this expedition we have traversed over 110 vertical kilometers (68 miles) and proved the capabilities of a vehicle that will be a platform for science, film making and exploration of Earth’s hidden recesses,” McCallum added.

Rob McCallum holding a styrofoam cup compressed during its visit to the bottom of the Mariana Trench while aboard Limiting Factor’s record setting dive. Photo: Reeve Jolliffe/EYOS Expeditions

Also onboard from EYOS was Expedition Director and Undersea Projects Kelvin Murray, along with an Expedition Physician and Expedition Photographer.

Between April 28 and May 5, 2019, the Limiting Factor completed four dives to the bottom of Challenger Deep and one final dive on May 7, 2019 to the Sirena Deep which is also in the Mariana Trench, approximately 128 miles to the northeast. Two of the dives, including the deepest one made on April 28, were solo dives piloted by Vescovo.

The full diving program during this phase of the overall expedition consisted of:

The Five Deeps Expedition is being filmed by Atlantic Productions for a five-part Discovery Channel documentary series due to air in late 2019.

“It is almost indescribable how excited all of us are about achieving what we just did,” said Vescovo after arriving in Guam after the completion of the dives. “This submarine and its mother ship, along with its extraordinarily talented expedition team, took marine technology to an unprecedented new level by diving — rapidly and repeatedly — into the deepest, harshest area of the ocean. We feel like we have just created, validated, and opened a powerful door to discover and visit any place, any time, in the ocean — which is 90% unexplored.” 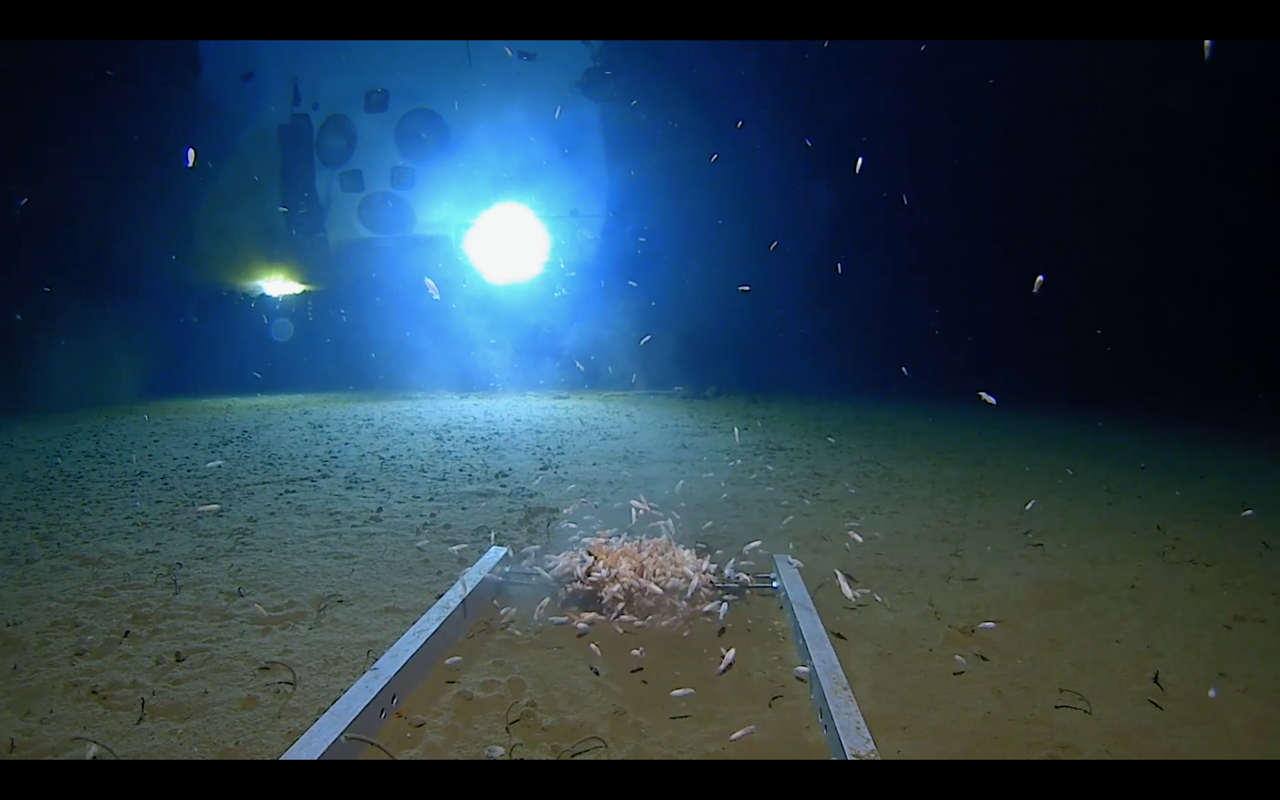 Limiting Factor approaches a lander at the bottom of the Mariana Trench.

On board the DSSV Pressure Drop for this historic accomplishment was legendary American oceanographer, explorer and marine policy specialist, Dr. Don Walsh (Captain, USN Ret.), who made the first successful decent into the Mariana Trench in 1960. The maximum depth achieved was measured and later corrected to be approximately 10,916 meters.

“Victor Vescovo’s imagination and fierce curiosity; Triton Submarines technical brilliance, and the outstanding performance of the officers and crew of mother ship Pressure Drop all converged to make this expedition a huge success. And I was there to see it,” said Dr. Don Walsh (Captain, USN Ret.). “Nearly six decades ago Jacques Piccard and I were first persons to dive into Challenger Deep, the deepest place in the World Ocean. Then in 2012 James Cameron made a solo dive there. And now in 2019, The Five Deeps Expedition’s submersible Limiting Factor was the third.”

Walsh continued, “This time it was an impressive tour de force as the team repeated the Challenger Deep dive four times in just eight days. This was a demonstration of system reliability and operational efficiency never seen before in exploration of the oceans’ deepest places. I was proud and honored to have been invited to be part of Victor’s team when it made world history at Challenger Deep.”

As with every other previous expedition dive, the team extensively measured and mapped the operating area with a Kongsberg EM124 sonar to pinpoint the desired dive sites. Once on the bottom, Vescovo or the two-person sub team of pilot and specialist usually spent 3-4 hours on the bottom conducting their survey and science missions. On average, it required 3.5 hours for the submersible to reach the bottom of the Challenger Deep and 3.5 hours to ascend. The average total mission duration lasted from 11-12 hours including one hour combined for launch and recovery of the sub from the surface, well under the submersible’s required life support endurance of four days with two persons onboard.

With his dives, Vescovo also became the first person to have summitted Mount Everest and been to the bottom of the ocean, as well as having skied to both the North and South poles. Thus, he is the first to have completed visiting one version of the “Four Corners of the Earth”: Mt. Everest, Challenger Deep, and both geographic poles. In 2011, he completed the Seven Summits — climbing the highest peak on every continent — and has now been to the bottom of four of the world’s oceans.

Recovery of the Limiting Factor after diving to the Mariana Trench. Photo: Reeve Jolliffe/EYOS Expeditions

Other firsts or notable features of this recent phase (April 26 – May 7, 2019) of the Five Deeps Expedition:

“Our goal was to build a submersible capable of repeated dives to any depth with its pedigree and security assured by third party accreditation,” said Patrick Lahey, President of Triton Submarines. “Our dives in the Mariana Trench demonstrate we achieved our objective. The Triton 36,000/2 (“LF”) represents a quantum leap in the capabilities of a manned submersible and everyone at Triton is immensely proud to have had the privilege and opportunity to create such a remarkable craft, which was only possible by the unwavering support and vision of Victor Vescovo.”The next stop on the Five Deeps Expedition is the Horizon Deep within the Tonga Trench in the South Pacific Ocean. Previously measured at 10,882 meters deep, the Tonga Trench is widely known as the second-deepest ocean trench in the world. Due to the small difference in measured depths between the Challenger and Horizon Deeps, Vescovo and team plan to find out, once and for all, if the Tonga Trench is actually only second-deepest in the Pacific or if it actually deeper than the Mariana Trench.

After the Tonga Trench diving program is complete, the Five Deeps Expedition team will stop once more at the Puerto Rico Trench (Atlantic Ocean, 8.376 meters) on its way to the overall expedition’s fifth and final “Deep” dive in late August, the Molloy Deep in the Arctic Ocean. The mission at the Puerto Rico Trench is to perform science dives in a location previously visited by the French submersible Archimède in 1964.