For the third time, the Five Deeps Expedition has successfully dived to the previously-unvisited bottom of one of the world’s five oceans. The team completed a mission to reach one of the most isolated points on the planet: the deepest point of the Java Trench in the Indian Ocean.

Now measured at 7,192 meters/23,596 feet deep, Victor Vescovo is the first human to dive to its depths in the DSV Limiting Factor (Triton 36000/2 model submersible) the world’s deepest diving, currently operational submarine. EYOS is managing and leading this historic expedition. 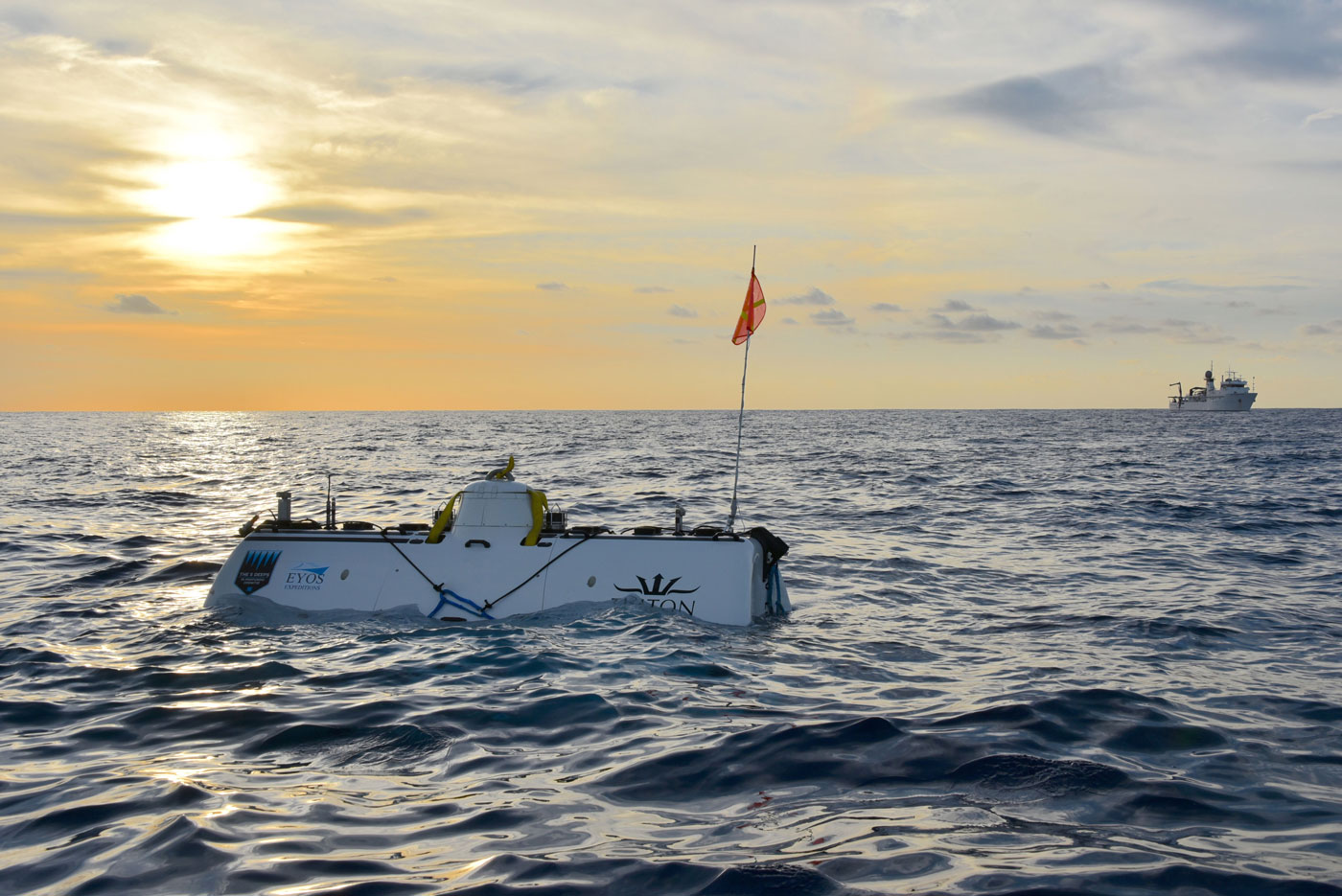 At the bottom of the trench, the team managed to capture footage from the sub and from the landers of what are believed to be entirely new species, yet unseen by humans. From the sub, a new species of hadal snailfish was observed amongst many other bottom dwelling organisms, and the landers observed an extraordinary gelatinous animal – thought to be a stalked Ascidean, otherwise known as a Sea Squirt – which does not resemble anything seen before.

Dr. Jamieson said “amongst many other rare and unique observations, the stalked Ascidean was a really significant moment. It is not often we see something that is so extraordinary that it leaves us speechless. At this point we are not entirely sure what species it was, but we will find out in due course.”

The Five Deeps Expedition is being filmed by Atlantic Productions for a five-part Discovery Channel documentary series due to air in late 2019.

“Among other things, the Five Deeps Expedition has finally settled the debate about where the deepest point in the Indian Ocean is,” said Vescovo. “Our Kongsberg EM124 multibeam sonar – the most advanced sonar currently mounted on a civilian vessel – provided detailed maps of the Diamantina Fracture Zone sea floor off the coast of Australia, as well as the deepest parts of the Java Trench. Together with physical visitation from unmanned landers and the DSV Limiting Factor submersible, we believe we have built the most precise maps possible of the deepest places in the Indian Ocean. The deepest point is in the central part of the Java Trench – not the east as was widely assumed – and that’s exactly where we dove.”

A second dive was piloted by Patrick Lahey, President of Triton Submarines and he was accompanied in the two-person submersible by Dr. Alan Jamieson, the Chief Scientist of the Five Deeps Expedition. With his dive to 7,180 meters it is believed that Dr. Jamieson, a Scotsman, has become the deepest-diving British citizen in history and the first to visit the hadal depths (greater than 6,000 meters). Jamieson added, “This was a big moment for hadal science and really demonstrated the scientific capability of the submersible. It has now proven that we can now do more, and access more places, than with any other marine vehicle in the world – including remotely-operated vehicles – at these extreme depths.”

“The tropical waters of the Java Trench are in direct but very welcome contrast to our last dive in the sub-zero waters of Antarctica,” said Rob McCallum of EYOS Expeditions. “Once again we have been able to obtain great quality bathymetry maps and then dive precisely at the deepest point. We know a lot more about the hadal zone of the Indian Ocean that we did a few days ago, so I am very proud of Victor, the team, and their contributions to ocean science.”

The Five Deeps Expedition is the first oceanic journey to take a manned, commercially- certified submersible vessel further and deeper than any in history. In addition to Vescovo’s solo dive, the expedition also accomplished:

In addition to the Java Trench dive, the Five Deeps Expedition has successfully conducted the first detailed, sonar mapping and sample-collection mission at the deepest part of the Diamantina Fracture Zone of the Indian Ocean – an area known as the Dordrecht Deep. Using advanced multi-beam sonar and an ultra-deep-sea lander, the team found it to be 7,019 meters deep, slightly shallower than previously thought when historically measured by other, less precise, methods.

The data will be an important contribution to the Nippon Foundation – GEBCO –Seabed 2030 Project to map the world’s seafloor in detail by the end of the year 2030.

In addition to mapping the fracture zone, a scientific lander from Newcastle University was deployed to approximately 7,010 meters for six hours to measure water temperature and physically confirm the depths registered by the sonar. The lander also collected – for the first time – biological samples of scavenging crustaceans known as amphipods. These samples will be brought back to Newcastle University at the end of the expedition and genetically analyzed to examine the role of ultra-deep fracture zones in evolution, the role of other faults and basins in the dispersal of hadal species (species only found deeper than 6 km below sea-level), and the degree of genetic drift possible across deep ocean trenches.

The Next Dive: The Challenger Deep

The next stop on the Five Deeps Expedition is the Challenger Deep within the Mariana Trench, commonly known as the deepest ocean trench on earth. The bottom of the Mariana Trench has been reached by only two other manned submersibles: James Cameron’s Deepsea Challenger in 2012, and Don Walsh and Jacques Piccard’s bathyscaphe Trieste in 1960 — both of which only reached the bottom once. Thanks to the advanced design of the DSV Limiting Factor, it is believed that Vescovo will be able to reach the depths of the Challenger Deep multiple times within one week and remain at the bottom for longer than anyone has been there before. It will also be the first time any expedition has made a manned dive in the Challenger Deep using an advanced, multi-beam sonar and three independent landers to pinpoint the deepest area and precisely target the dive location. The Five Deeps Expedition will attempt to dive slightly deeper than even the USS Trieste did in 1960, if it is possible.

The other remaining major dives planned for the Five Deeps Expedition include: