The deepest diving octopus ever filmed was recently discovered by Dr. Alan Jamieson of Armatus Oceanic, was a species belonging to the Grimpoteuthis family, making this a likely new species of ‘Dumbo Octopus’. The observations were made at 5,760 and 6,957 metres deep (3.6 to 4.3 miles deep) in the Indian Ocean during the recent Five Deeps Expedition, the world’s first manned expedition to the deepest point in each of the five oceans.

These new depth records extend the deepest reliable record of the octopus, and indeed the entire class of Cephalopoda, by 1,812 metres (over 1 mile deeper).

The deepest depth that octopuses are known to live is something that has historically been difficult to resolve.

Fragments and eggs have been found very deep, but until now, the deepest sighting confirmed by an image was a single photograph of an octopus at 5,145 metres deep in the Atlantic, taken 50 years ago.

Habitant extended to 99% of the seafloor

This depth extension increases their potentially available habitat from 75 % to 99 % of the global seafloor. Dr. Jamieson said, “This is a great example of how privately funded adventurism can work alongside science to produce both fascinating and important discoveries.” 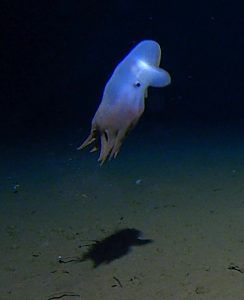 The Dumbo Octopus discovered was seen at depths of 5,760 meters and 6,956 meters.

The images of the deepest diving octopus were captured on the Five Deeps Expedition using one of the Caladan Oceanic Landers, known as Closp and Skaff that were designed by Triton Submarines and Dr. Jamieson. The   historic, record-setting 18 month expedition was organized and led by EYOS, and over 40 new species were discovered during the expedition. Other scientific results will be revealed over the coming year.

Dr. Jamieson: “There are still surprises”

Dr Jamieson said: “I think it’s great that after completing hundreds of camera-drops into the deepest places on the planet there are still these surprises. This represents a considerable depth extension to an important group of animals and proves that octopuses are alive and well at the great depths.”

He added: “Contrary to the scary creatures and monsters of the deep that the deep-seas are often wrongly stereo-typed with, here’s a little dumbo octopus going about doing whatever dumbo octopuses do. The only difference is that it’s doing so nearly 7 kilometres deep.”