EYOS Expeditions and Simwave have developed a bespoke ice navigation and expedition operations simulator course for superyacht officers that meets STCW and Polar Code requirements. This partnership combines Simwave’s expert instruction and sophisticated simulator technology in Rotterdam with the practical expertise of EYOS to deliver essential training with practical, real-world polar expeditions insight that is not found in any other course.

This innovative curriculum satisfies ice navigation training for nautical officers wishing to meet the requirements of the IMO’s International Code for Ships Operating in Polar Waters (Polar Code- Basic & Advanced), which came into force in 2017.  The Polar Code is mandatory under both the International Convention for the Safety of Life at Sea (SOLAS) and the International Convention for the Prevention of Pollution from Ships (MARPOL). The Polar Code covers the full range of design, construction, equipment, operational, training, search and rescue and environmental protection matters relevant to ships operating in the inhospitable waters surrounding the two poles.

Emphasis on practical and realistic scenarios

EYOS Expeditions CEO Ben Lyons said, “We set out to create something different with this course, however we didn’t want to just have a ‘tick the box’ exercise with scenarios that yacht officers would never experience or learn anything from. Throughout, we’ve put an emphasis on practical topics and realistic simulator learning combined with actual expedition operations.”

As an example, Simwave’s team modelled actual passages and landscapes that yacht officers are likely to navigate, including Antarctica’s famous Lemaire Channel, Paradise Bay, Port Lockroy and Palmer Station, along with fjords in Svalbard and the Canadian Arctic, including Bellot Strait. This is one of the first times Antarctica has been successfully developed in a simulator exercise, and by combining that with EYOS’ insight on expedition operations, a unique concept has been developed. 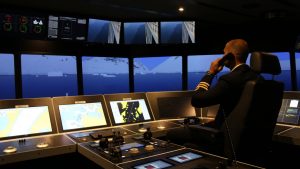 A transit of Lemaire Channel on Simwave’s 360-Degree Simulator

Basic and Advanced Ice Navigation training is delivered through a combination of presentations, tabletop exercises and in-depth scenarios utilising Simwave’s state-of-the-art 360o bridge simulator, with floor projection and docking stations. Participants will simulate operations with small boats (Zodiacs & kayaks), controlling their vessel near sensitive wildlife (polar bears and whales) in line with IAATO and AECO guidelines, interact with an Expedition Leader, and conduct emergency scenarios with a range of authentic weather conditions.

EYOS Expeditions’ CEO Ben Lyons said, “We are seeing unprecedented growth in the expedition yacht sector, combined with a desire for yachts to visit remote and harsh polar waters.  Our partnership with Simwave provides an opportunity for superyacht officers to gain the skills and qualifications they need to safely and responsibly explore these regions.”

As part of the simulator time, students navigate Damen Yachting’s 77-meter SeaXplorer, the first of which is due for delivery this year. Lyons said, “EYOS helped design the SeaXplorer to be the ultimate expedition yacht; we couldn’t think of a better vessel for students to operate in these virtual conditions.”

Simwave CEO & Founder Marcel Kind said, “At Simwave we are the forefront of improving safety at sea. With the increase in expedition travel over the last decade, we have been focusing our attention on the polar regions. To protect the environment, the vessel and its crew, we need to raise the bar and create best-practice guidelines. Customized training is an essential part in this and together with EYOS we were able to create a new standard in polar water operations.”

Curriculum developed in cooperation with IAATO, AECO and local authorities

Kelvin Murray, EYOS Director of Expedition Operations and Undersea Projects, was part of the team developing the course. He commented, “In addition to field operations experience, the EYOS team work closely with maritime authorities and SAR agencies across the globe such as Transport Canada, ARCSAR, the Governor of Svalbard and the UK Foreign & Commonwealth Office. EYOS staff sit on both Executive Committees of AECO and IAATO member organisations, and are regularly consulted by industry and governments alike regarding complex operations in remote regions.  The team at EYOS have successfully delivered over 1,200 expeditions in the Arctic and Antarctica, and now we are sharing this unparalleled experience with other seafarers through Simwave’s superb simulator system.”