In a world first, EYOS Expeditions today coordinated a call between the International Space Station and the DSSV Pressure Drop, the mothership of submersible DSV Limiting Factor. Limiting Factor ‘LF’ had just returned from a full ocean depth dive in the Challenger Deep, the deepest point in the ocean, with pilot Victor Vescovo of Caladan Oceanic and oceanographer/astronaut Dr. Kathy Sullivan onboard. The ISS is in Low Earth orbit at an altitude of 408 kms (254 miles) while the LF operates at a depth of nearly 7 miles.

Kathy Sullivan had just completed her historic dive to become the first woman to reach the deepest point in the ocean and the first human to have been in space and at full ocean depth. In 1983, Dr Sullivan, a veteran of three space shuttle flights, became the first American woman to walk in space. She is the 8th person to reach the bottom of the Challenger Deep (The first two were Don Walsh and Jacques Picard in 1960. James Cameron also reached the bottom of Challenger Deep in 2012).

Last year, Victor Vescovo became the fourth person in history to reach Challenger Deep as part of his Five Deeps expedition; over the course of 7 days, his team made 5 dives in the Mariana Trench.

The two vehicles operate in very different environments; the ISS operates in an environment of zero pressure in the vacuum of space, while LF operates at a crushing pressure equivalent to having 2,200 tonnes of pressure pressing down on the hatch. LF was built by Triton Submarines and is the first vehicle in history that has repeatedly gone to the deepest point in the ocean. 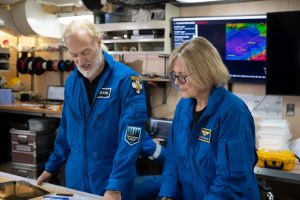 Dr Kathy Sullivan and Victor Vescovo reviewing the plans before their dive to Challenger Deep.

The recent launch of SpaceX’s Crew Dragon highlighted the exciting potential of private companies contributing to the technological advancement of space flight with a reliable, reusable vehicle. The commercially-rated, a first for an ultra deep-diving submersible, Limiting Factor is a privately funded hadal exploration vehicle that has transformed our ability to explore the deep ocean in the same manner.

EYOS Expeditions expedition leader Rob McCallum said, “It was amazing to set up a conversation between two ’spacecraft’; one operating as a platform for research in outer space, the other an exploration vehicle for ‘inner space’. Two groups of humans using cutting edge technology to explore the outer edges of our world. It highlighted the vast span of human endeavour while at the same time linking us close together as fellow explorers. We are well used to our clients being ambitious in their quest to explore… but this was a new ‘first’.”

Kathy Sullivan said, “As a hybrid oceanographer and astronaut this was an extraordinary day, a once in a lifetime day, seeing the moonscape of the Challenger Deep and then comparing notes with my colleagues on the ISS about our remarkable reusable inner-space outer-spacecraft.”

Victor Vescovo said, “We made some more history today… and then got to share the experience with kindred spirits in the ISS. It was a pleasure to have Kathy along both as an oceanographer during the dive, and then as an astronaut to talk to the ISS.”