Explorer Victor Vescovo (Founder of Caladan Oceanic) and EYOS Expeditions today announced the discovery of the wreck of USS Destroyer Escort Samuel B. Roberts (DE-413), known colloquially as the ‘Sammy B’ on 22nd June, 2022.

The deepest wreck ever identified and surveyed

Pilot Victor Vescovo, alongside sonar specialist Jeremie Morizet of France, dove and located the wreck of the ‘Sammy B’ from bow to stern – although broken into two pieces separated by about 10 meters – resting on a slope at a depth of 6,895 meters maximum depth.

This renders the wreck as the deepest wreck ever identified and surveyed, surpassing the depth of the USS Johnston achieved by pilot Victor Vescovo of Caladan last year (6,469 meters).  The ‘Sammy B’ is those 426 meters deeper than the Johnston. 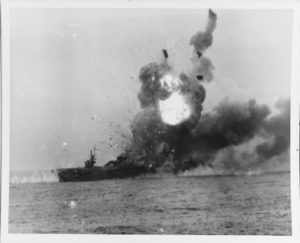 Although possessing less than half as many guns as the Fletcher-class destroyers like Johnston, one-third as many torpedos, and less speed, the Captain of the Sammy B, LCDR Robert W. Copeland, took his ship into battle where she – according to several accounts – was engaged by three different Japanese battleships including the largest battleship ever constructed, the Yamato.  The Sammy B put under her own outmatched guns two Japanese heavy cruisers, the Chókai and Chikuma, both of which were significantly damages with her withering point-blank fire.  Of the Sammy B’s 224 man crew, 89 were killed (most sources say 90, but one man on the roster was not present at the battle)* and 120 were saved, including Copeland. 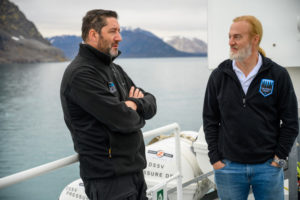 Victor Vescovo said “It was an extraordinary honor to locate this incredibly famous ship, and by doing so, have the chance to retell her story of heroism and duty to those who may not know of the ship and her crew’s sacrifice.  In difficult times, it’s important to reflect on those who sacrificed so much, so willingly, in even more difficult times to ensure our freedoms and way of life.”  He continued, “I always remain in awe of the extraordinary bravery of those who fought in this battle agains truly overwhelming odds – and won”

Kelvin Murray, Expedition Leader and Director of Expedition Operations & Undersea Projects for EYOS said, “As ever, there’s been an incredible and dedicated effort by the whole team – the ship’s crew, sub team, historians and other specialists.  Using a combination of detective work and innovative technology, everyone has pulled together to reveal the final resting place of this tenacious ship.  It’s been challenging, thrilling and poignant expedition, one that recognizes the ships and sailors from all nations who fought so hard during this battle.  We are all proud of what has been achieved and humbled by what we witnessed.”

The search for the ‘Sammy B’ 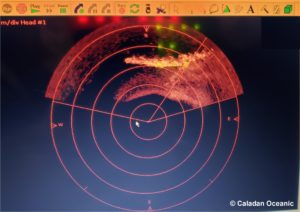 Sonar of Sammy B

Caladan Oceanic and the team at EYOS Expeditions conducted a series of six dives over eight days searching for the wrecks of both the Samuel B. Roberts (DE-413) and the Gambier Bay (CVE-73) at over 6,500 meters from June 17th – 24th.

On June 18th, Australian sub pilot Tim Macdonald of Caladan Oceanic and French sonar specialist Jeremie Morizet of Deep Ocean Search located some debris that was positively identified as belonging to the ‘Sammy B’.  Positive identification was possible from the three-tub torpedo launcher among the sunk vessels)/. However, they were unable to locate the main wreck.

Up until the discovery, the historical records of where the wreck lay were not very accurate.  The team located the wreck through a combination of exhaustive historical research led by Caladan Oceanic affiliate LCDR Parks Stephenson, who led the historical efforts at the USS Johnston last year.

The search also involved the use of a Kongsberg EM-124 deep ocean, ship-mounted sonar for bathymetry and backscatter analysis, as well as a first-of-its-kind ocean depth (11,000,) capable, submersible-mounted sidescan sonar system built for Caladan by Deep Ocean Search (of France), combined with a shorter-range Kongsberg Mesotech 1,000 high-frequency sonar.

All data related to the dive, including sonar maps, video, and photographs, will be donated to the US Navy and its Heritage and History Command. 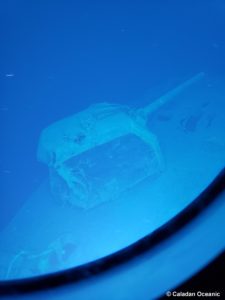 Samuel J. Cox (SES) RADM, USN (Ret) Director of Naval History said “The Commanding Officer of USS SAMUEL B. ROBERTS (DE-413), Lieutenant Commander Robert Copeland, stated there was “no higher honor” than to have led the men who displayed such incredible courage going into battle agains overwhelming odds, from which survival could not be expected.  This site is a hallowed war grave, and serves to remind all Americans of the great cost born by previous generations for the freedom we take for granted today.”

The team conducted two search dives for the sunken carrier Gambier Bay (CVE-73) at over 7,000 meters but was also lost in the battle, due to the scarcity and unreliability of data indicating where she might have gone don, as well as time limitations on the expeditions.

Caladan Oceanic believes this use of it’s new Deep Ocean Search side-scan sonar is the deepest side-scan sonar ever installed and operated on a submersible, operating well beyond the standard commercial limitation of 6,000 meters, making this also a significant technical first.  The system is tested to full ocean depth (11,000 meters) and after successful trials at increasing depth such as at the ‘Sammy B’, Caladan intends to take it all the way down to the bottom of the ocean at the Mariana Trench’s Challenger Deep in early July.

The Caladan Oceanic & EYOS teams are now on their way back to Guam to begin further expeditions in the Western Pacific, to conduct a series of four planned dives at the Challenger Deep in order to continue explorations there and map previously unvisited areas of the trench system.

Caladan still plans to dive on (or about) July 12th with Dr. Dawn Wright (ESRI Chief Scientist) and later, make the first crewed descents into the Yap and Palau trenches with Navigator Seasario Sewralur and Former President of Palau, Thomas Rememngesau.

Next post
‹ EYOS Announces Hanse Explorer will Return to the Arctic for Summer 2023
Previous post
Antarctic 360º : 7 Days of Exploring ›